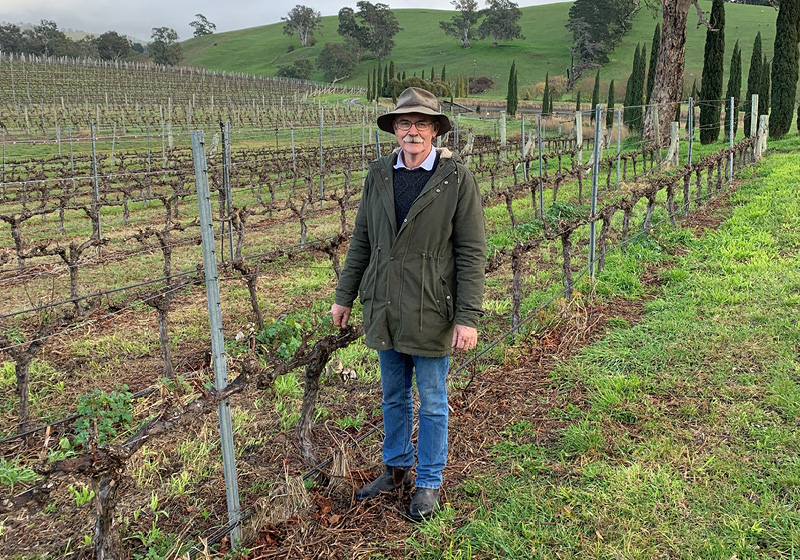 The first happened on the road from Melrose to Adelaide, back when most cars didn’t have AC.

Even as a child, travelling in summer from the family farm to the city, he was struck by the change from brown, barren sheep paddocks on the plains to the cool, green vineyards of the valley.

“It was such a beautiful landscape, such a contrast.”

Years later, he and wife Janet bought land in the Adelaide Hills which included a stone wine cellar built in the 1870s by Archdeacon Farr.

This was the original Brightlands Cellar used by Dr William Angove, founder of Angove Family Winemakers.

“I kept reading about the history of Dr Angove, and I thought if he could grow grapes, I could grow them too…”

In 2002, after a career which ranged from the state sector to real estate, not to mention building agricultural machinery, Brendan got his grapes: 46 acres of slow-ripening, close-planted reds and whites in the Forreston Valley.

It was a move made ‘in a moment of misguided optimism!’

In truth he loves his vines, notwithstanding the challenges of trying to stay profitable as a small, niche grower.

And amid small Adelaide Hills vineyards, where creating a legacy business is often the exception vs the norm, steady progress gives Brendan and Janet hope for on-going family involvement in the future.

This in turn has influenced his decisions as vigneron.

“When you have this ambition that someone in the family will succeed you, you tend to lavish a lot more care and attention on the vineyard than you would if you were going to sell it.”

His views on sustainability have also evolved. These days he’s more interested in the long-term effects of many inputs, while still seeking to grow premium fruit.

Case in point? Fungal disease management. In 2018, with other projects underway, he became distracted and let powdery mildew spray timings slip. Some chardonnay became so badly infected Treasury rejected it.
It was an expensive lesson. So when his agronomist asked him to try a breakthrough DMI fungicide from BASF in the 2019 season, he said yes.

“I like to use newer chemicals in the hope that diseases haven’t built up resistance to them, and to use chemicals from different groups to help prevent that happening.”

Along with several sulphur sprays, and fungicides from other mode of action (MOA) groups, Brendan applied Belanty twice to his chardonnay, in late November 2019 and early January 2020.

Disease pressure was light; the fruit was clean, and he welcomes the availability of Belanty as a new standard in DMI disease control.

“Crop protection is vitally important for us. Our income depends on getting it right.”

Minimising the risk of fungicide resistance is increasingly important in choosing chemistry, and while cost is always a factor, he prefers R&D suppliers for disease management.

“When it comes to the more serious things, like powdery mildew, I’m less inclined to use generics because we want the confidence of the big known name.”

It has a better residue profile with a later application window than other DMI’s, and maximum residue limits (MRLs) have been approved for export to the EU.

For more information about Belanty, speak to your local BASF representative.